NEW YORK (Reuters Life!) – Afghanistan’s National Museum is not yet ready to display a treasure trove of 2,000-year-old gold thought lost during three decades of war, but in the meantime Americans and tourists can see it in New York.
Known as the Bactrian gold, items such as an intricately carved gold belt, a delicate crown and numerous bracelets are part of a collection of more than 21,000 pieces of gold found in 1978 just before the Soviet invasion of Afghanistan.
Rumored to have been taken to Moscow or stolen, the items were hidden in a vault and the secret was kept by a handful of employees of the National Museum of Kabul throughout the Taliban years and the U.S.-led invasion in 2001. 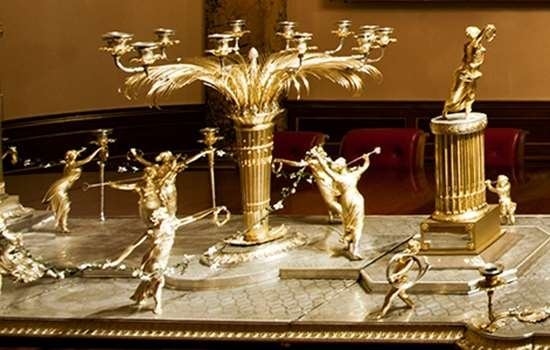 Only in 2003 was the vault at the presidential palace cracked open to reveal the extraordinary treasures that were originally buried in the tombs of six nomads in northern Afghanistan in the 1st century AD.

“Our national museum is still not in a condition that you would be able to display them there,”

at the Metropolitan Museum of Art in New York.
He told Reuters proceeds of the traveling exhibition — which has already been to Washington, San Francisco and Houston — would help renovate the museum which was bombed decades ago and remained closed for some 25 years.

The museum has now reopened despite persistent violence, Jawad said, but the items on display in New York will go to Canada next and will not return to Kabul before 2011.
“New York has important symbolic significance for us,” Jawad said at a news conference, recalling that both Afghanistan and New York were victims of the Taliban and al Qaeda. “The terrorists that destroyed your twin towers destroyed the twin Buddhas in Afghanistan,” he said.

Shortly before U.S.-led forces invaded Afghanistan in 2001 in retaliation for the September 11 attacks, the Taliban blew up two giant standing Buddha statues carved into a cliff face in Bamiyan, saying they were offensive to Islam.
“By bringing this collection to you, we want to emphasize that you can not destroy the history, identity, determination and courage of the people by acts of sabotage and terrorism,” Jawad said.

Fredrik Hiebert, National Geographic archeologist who curated the exhibition, said the aim was to counter the image of Afghanistan as a war-torn, desolate country.
Starting from a 4,000-year old Bronze age carved golden bowl, the show illustrates the development of an Afghan artistic heritage, influenced by its position on the trade routes of the Silk Road from Europe to China and India.
The exhibit includes artifacts from a Hellenistic city in northern Iraq founded by Alexander the Great and a collection of 1st century AD objects from Rome, Greece, India and China all found in the 1930s in two bricked up rooms at a site near what is now the U.S. military air base at Bagram.
“A merchant obviously became a little worried about something and bricked up his warehouse, and luckily for human history he never came back,” Hiebert said.

Despite the riches on display, Jawad said Afghanistan had lost countless more artifacts due to looting and he appealed to international museums and collectors to help repatriate them.

“It’s important also for the private collectors to come forward and send these items back to Afghanistan where they belong,” Jawad said.

The exhibition will run from June 23 to September 20.