AFGHANISTAN’S ambassador to London has pledged to personally contact relatives of each of the 456 British service personnel who died in the bloody 14-year campaign to free his country as at least 95 people were killed in one of its worst terror attacks. Calling British troops “heroes who fought to make the world a safer place”, Said T Jawad said he had made it a “priority” to express the Afghan Government’s gratitude for their service and sacrifice.

However, last night he also called upon Britain to urgently enhance its 650-strong training mission in the country, still at the mercy of both Taliban and ISIS forces.

It comes in a week which both groups have been disastrously active, with a Taliban siege on Kabul’s Intercontinental Hotel in Kabul killing at least 22, and an attack by ISIS on a Save the Children centre in Jalalabad, on the Pakistan border, in which two people died.

A Taliban suicide bomber is thought to have used an ambulance to detonate a blast near EU offices in Kabul on Friday night, with at least 95 dead and 140 injured.

Mr Jawad said a British Army officer has already been appointed to liaise between Embassy staff and next of kin of the soldiers, sailors and aircrew who lost their lives tackling the Taliban in Helmand Province between 2001-2015.

“To us, every one of  456 British soldiers that lost their lives are heroes,” he said. “They fought to make Afghanistan, the region and the world safer place. I have tremendous respect for every one of them.

“Since my arrival here in May I’ve made it my priority to reach out to those families of individuals who fought in Afghanistan to show them how grateful we are for their services and sacrifices.

“These sacrifices, and the hard fought British effort, provided an environment for the rest of Afghanistan to flourish.”

It had not been in vein, he said, pointing to key improvements. They include the prospect of a million boys and girls beginning school for the first time in March, and 84 new universities and colleges. In 2002, the country boasted only a million pupils in total, including undergraduates who attended just two universities. Last month an all-girl team won a major European robotics competition with a prototype solar device to help farmers.

Where once there were only 200 telephones in Kabul, now 80 per cent of the population have mobile phones, he said, adding: “It means being connected with the world; being a member of the big family of humanity.

“This is due to British presence and support. They are all things that have improved the quality of life here and brought a new generation of people to understand and appreciate what the UK is doing, “ added Mr Jawad , whose wife founded a charity that works on projects for women and children in Afghanistan.

He dismissed ISIS in Afghanistan as an “non organic” interloper which had little chance of success.

“It’s not like Iraq or Syria. They are imported here. They speak Arabic. We do not,“ he said.

“And while there may have been some admiration for what they stand for in other countries, we’ve experienced Taliban rule already. ISIS destroyed Palmyra in Syria. The Taliban already destroyed the Buddhas of Bamiyan  in 2001. We know what they’re offering.”

He admitted, however, that the job was not yet finished.

“As we have seen, the threat of terrorism is real in Kabul, as it is in London and in Madrid. It requires the courage and commitment of many selfless British, Afghans, NATO and other soldiers to insure the safety and security of our cities and citizens,” he said.

“It’s a hard task to rebuild a country while we’re continuing to fight. Every day people leave there homes in Kabul to go to work or school and wonder if they will come back.”

He said Afghanistan was “deeply grateful” that Britain had given £2bn in foreign aid for things like building infrastructure, riding the country of land mines and the empowerment of women. A further £750 has been pledged by 2020,

While he did not expect British troops to take up arms again, he said Downing Street could still be doing more.

Britain currently supplies 650 military trainers to the region. The US is expected to have 15,000 by the middle of this year; not to train, but to fight.

Ambassador Jawad confirmed Afghanistan was refusing training help from Pakistan, backing recent claims by Donald Trump that Islamabad was not doing enough to prevent terror within the country’s borders.

“We can carry out the war against terrorism ourselves – it is our job, and there is no lack of courage in Afghanistan,” he said. “But the UK could enhance the quality of the people and equipment.”

He pointed to a lack of air transport that would allow trainers to cover more ground. Britain had only three Puma helicopters in Afghanistan.

“We know that one good trainer equals ten men. We’d also like more opportunities to train in Britain, like our cadre in Sandhurst. We’ve been asking for this.

“We also need a boost with intelligence gathering to trace the movement of illegal money.”

Afghanistan’s poppy fields still account for 80 per cent of the world’s opium, and the Taliban has built a large network of laboratories to produce heroin, with both it and ISIS making vast profits from its export.

A new plan has already seen a 700 per cent increase in the number of farms who have turned from poppy production to Saffron since 2014. The destruction of laboratories has begun, but more help is needed to trace the money network. 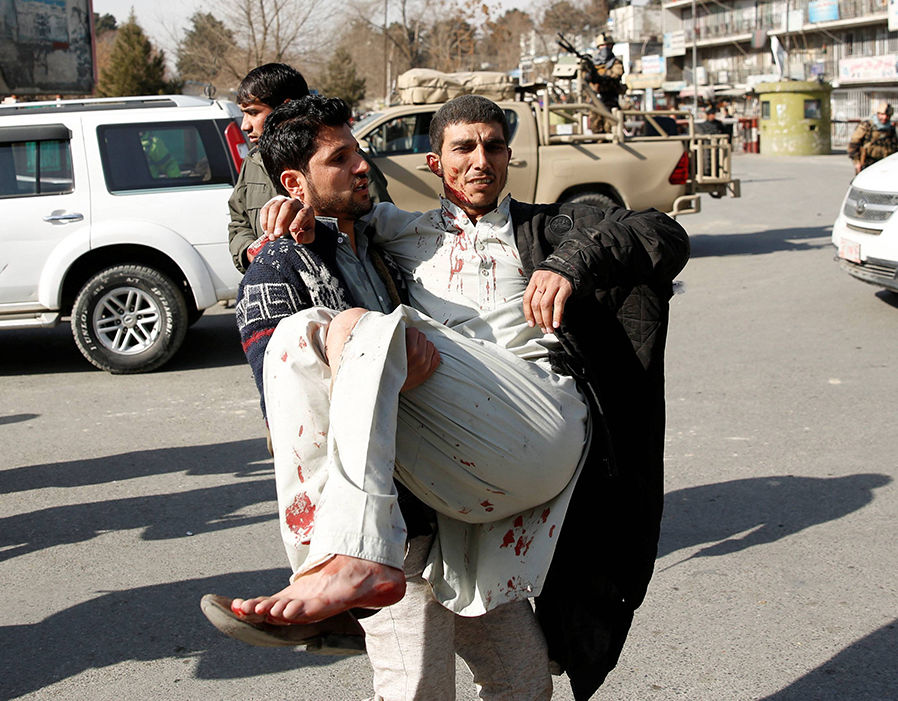 An injured man is carried from the scene – REUTERS

The National Crime Agency is helping with this, but we need a boost in intelligence assets on the ground,” he added.

Ultimately, international help will give farmers “more confidence  in tomorrow’ and incentivise them to forego short-term poppy profits for other types of agriculture.

“If you are worried there’s not going to be a next year, it only takes three months to cultivate poppies,. And as soon as you turn it into opium paste it’s like cash in your pocket,” he said.

He also backed calls for all Afghan interpreters, some of whom lost limbs helping UK troops,  to be given opportunities to live and  study in Britain.

“These people put their lives on the line for a good cause. We’d like to see if there a way they could all be accommodated here,”  he said.

“The notion that they will remain in the UK forever is wrong. Afghans are resourceful but, because of the war, many of these interpreters have missed out on education.

“We want them to become educated and skilled so they can bring those skills back home.”